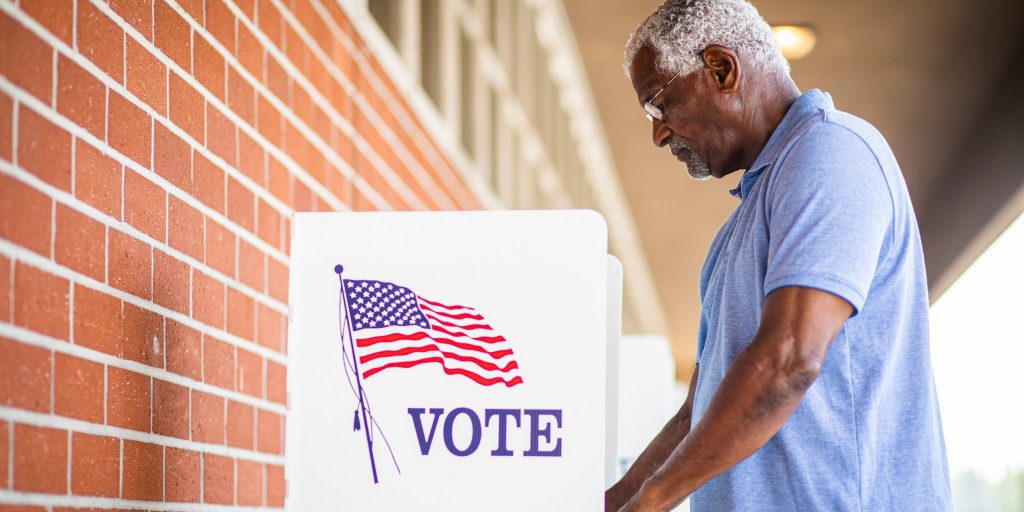 It’s hard to believe, but we are less than two months away from midterm elections in early November. Given all the well-known worries this year — from inflation to the war in Ukraine, the economy to the bear market — most investors haven’t started to think about midterms quite yet. But we expect that to change as this important date nears.

Weakness is Typical for a Midterm Year

Midterm election years are known for big stock market drops and weakness for most of the year, generally until late-year rallies. So far, that sounds a lot like 2022. Since 1950, the S&P 500 has corrected peak-to-trough more than 17% on average during the year. Out of the four-year presidential election cycle, midterm years typically see the largest corrections. Why? During his or her first year in office, a new president mostly enjoys a relatively smooth ride. It isn’t until the next year that bumps arrive. Toss in the uncertainty of the midterm elections (markets hate uncertainty) and conditions are ripe for trouble.

As the chart below shows, stocks usually don’t do well under a first-term president in a midterm year. In this scenario, which is one of the weakest, the S&P 500 typically gains just more than 2% for the year. However, stocks typically do quite well the following year. In fact, a year after the midterm-year correction, stocks jump more than 30% on average. We think there’s a good chance June 16 was the lowest point for this calendar year, and that could leave many investors smiling into next year. 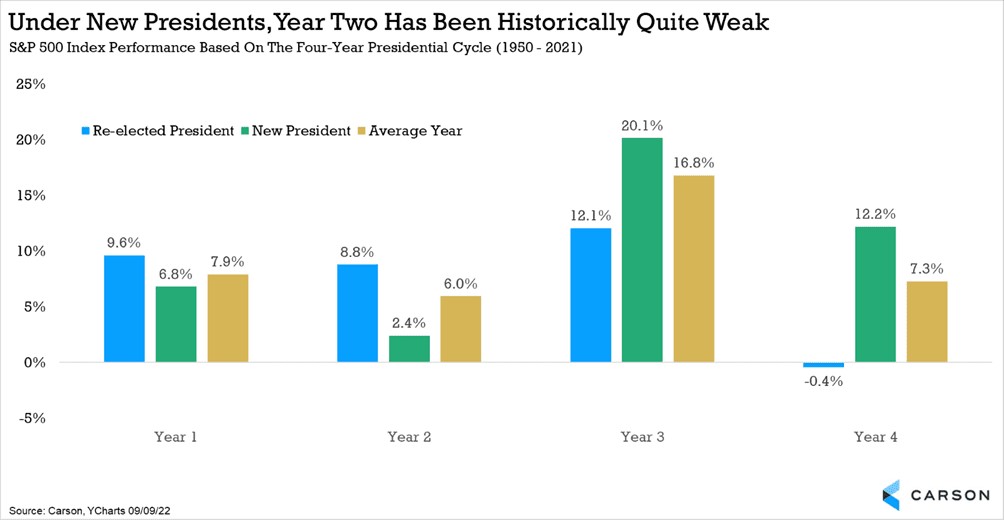 The bottom line is 2022 hasn’t been fun for investors. But it’s important to remember we’ve seen this before and there’s reason to expect better days ahead.

How Will the Election Results Impact Markets?

Investors often want to know which sectors will do well if one or the other party wins an election. Here’s the truth: It isn’t that simple. After President Donald Trump won in 2016, many investors expected steel, coal, and financials to do well, and technology to struggle. The opposite happened. When President Joe Biden won in 2020, the consensus was renewable energy would do well while coal and refiners would struggle. Again, the opposite happened. While there may be some value in following election results, be careful not to blindly follow the crowd’s expectations.

Midterm elections are not typically favorable for the party in power. Since World War II, the controlling party has lost four seats in the Senate and 26 seats in the House on average. This year, Republicans only need five seats to flip the House and most strategists think this is quite possible. The Senate is split 50/50, but the open Senate seats are closely contested and considered a coin flip by many. What does this mean for investors? The best scenario for stocks is a Democratic president and Republican-controlled Congress (this was the case in the late 1990s under President Bill Clinton). A Democratic president with a split Congress has also generated solid returns in the past. Both scenarios suggest post-November, history will be with the bulls.

On this subject, we prefer to take a broader view and share another important takeaway for investors. From the date of the midterm election going out one-year, the S&P 500 has been higher every single time since World War II. Not all years were up significantly, but a consistent gain and an average of 14.1% is worth noting.

It’s as simple as that, as the chart below illustrates. 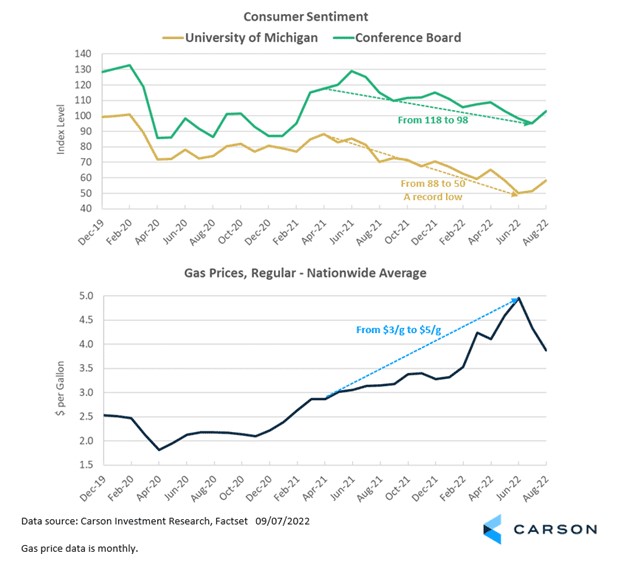 Consumer confidence started falling in the summer of 2021 as gas prices climbed. Granted, the economy faced other challenges last summer, such as the spread of the COVID Delta variant. But the nationwide average gas price crossed the $3.0/gallon mark in May 2021 and rose steadily over the remainder of the year. All the while, consumer confidence moved lower, despite COVID fading into the background and economic data improving.

Then, at the end of February 2022, Russia’s invasion of Ukraine sent commodity markets into a frenzy and surging global oil prices pushed gas prices above $4/gallon. March-April saw some relief, but issues with refining capacity in the U.S. sent gas prices to $5.0/gallon by mid-June. That was a 63% increase in one year. No wonder the University of Michigan Consumer Sentiment Index hit a record low of 50.0 in June. That’s lower than the start of the pandemic in March 2020 (72.3) and the depths of the financial crisis in 2008 (55.3). Even the Conference Board’s Consumer Confidence Survey, which is typically tied to the strength of the labor market, fell significantly, from 118 in April 2021 to 95 in July.

But over the last four to eight weeks, sentiment indicators have picked up again just as gas prices have seen a steep fall, from $5/gallon to about $3.75.

Consumer confidence tells us how consumers are feeling about the economy. And this is important because 70% of the U.S. economy is made up of consumer spending. Confident consumers can potentially fuel more spending and economic growth. On the other hand, if consumers are feeling down, they may save rather than spend, especially if they feel that poor economic conditions will eventually impact their personal finances.

The Federal Reserve considers consumer sentiment, and especially consumer expectations for inflation, an important indicator. Fed members fear that rising inflation expectations will keep inflation higher for longer. The idea is if consumers expect more inflation, they will ask for higher wage increases, which will result in more spending and put upward pressure on prices, leading to a cycle of “spiraling inflation.” Now, inflation expectations rose over the past year, along with gas prices. But there is some good news as far as the Fed is concerned: Long-term inflation expectations (over the next five years) have fallen to 2.9%, and that is right at the three-decade average for this metric. 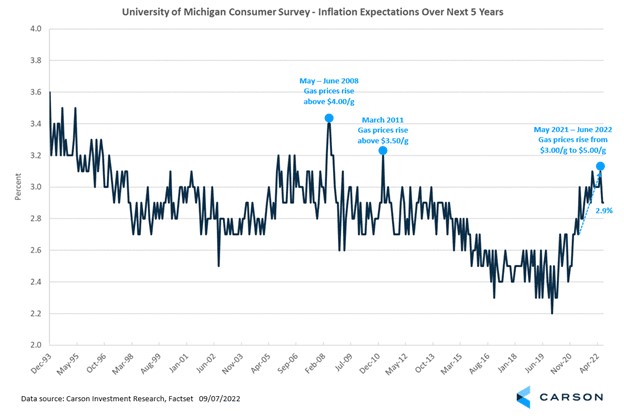 Moreover, recent unemployment claims data suggest the labor market remains strong. Unemployed workers who are continuing to collect unemployment benefits now make up 1% of the labor force, which is a record low. This is not something we would expect if the economy were in a recession. 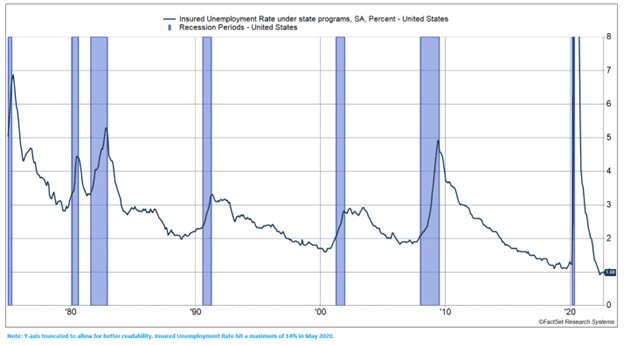 Combine a strong labor market with easing price pressure, and we believe consumer confidence should continue rising as we head into the fall. This should give the Fed some breathing room as it increases rates to fight inflation, with slightly less risk of pushing the economy into a recession.