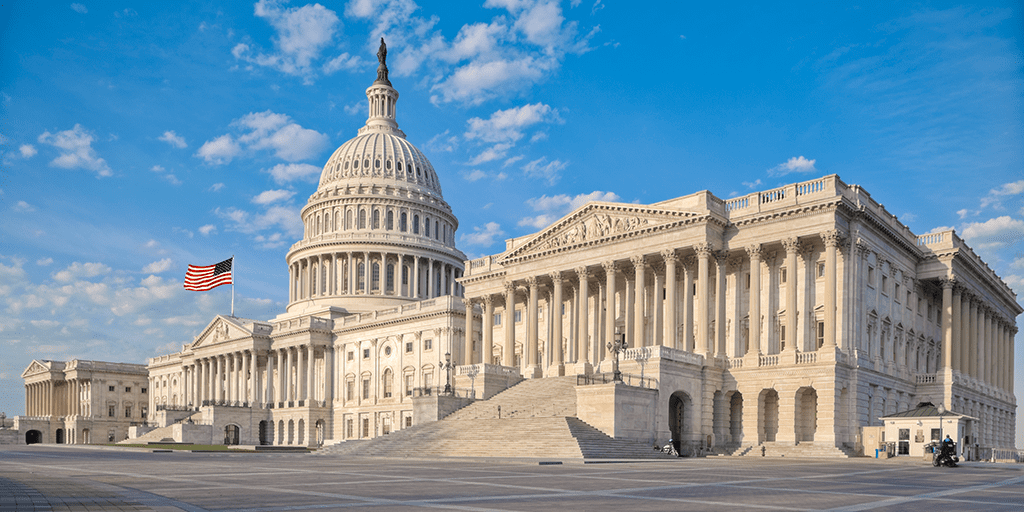 As the Federal Reserve prepares to kick off its major monetary policy conference in Jackson Hole, Wyoming, its tone has become more hawkish. That is pressuring markets, which have rallied in recent weeks as inflation has dipped lower and economic data has remained healthy. The market’s rally suggested the Fed’s approach was working and investors began to expect rate increases may slow. However, those expectations were checked by the Fed’s comments Thursday that additional rate hikes will be needed to get inflation under control.

The market rally also improved market breadth. More than 90% of S&P 500 companies have recently moved above their average price over the previous 50 days. This measure tracks the percentage of stocks that are trending upward, and a high percentage typically means continued outperformance. There have only been 14 other periods when 90% of the S&P 500 has been above its 50-day moving average. Only once did the S&P 500 decline in the following 12 months, and the average return during those periods was 17.3%.

Economic data reported last week was fairly strong. Industrial production surged 0.6% to a new record high. Strength in auto production and energy pushed the measure higher. Production is far stronger than in past recessions (Figure 1). Core retail sales, which exclude food and energy, rose 0.7% — or 0.1% when adjusted for inflation. That small gain was the first, after adjusting for inflation, in three months.

The S&P 500 declined 1.2% last week. The global MSCI ACWI shed 1.6% and the Bloomberg U.S. Aggregate Bond Index added 0.1%. Comments from the monetary policy conference at Jackson Hole and PCE inflation will lead a list of key economic releases this week. 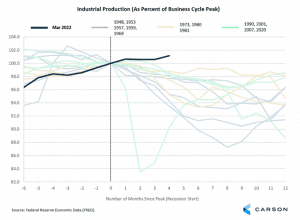 One of the challenges for hospital patients is the dizzying number of medical professionals that visit every day. Some of those visits are crucial to our health and others offer a smaller benefit. Some bear good news and others suggest more improvement is needed. The U.S. economy is suffering from high inflation and recession risk, but we are keeping tabs on the reports and policymakers to see how well the patient is doing and what risks to watch.

Most of the news suggests the patient is getting better. Last week, two important macroeconomic indicators pointed toward an economy that may avoid a recession and clearly isn’t in one now. The big surprise was industrial production, which is one of six indicators considered by the National Bureau of Economic Research to declare a recession. Industrial production rose 0.6% in July, hitting a new record high. This is a volume-based index, and that means it’s adjusted for inflation. Current levels of industrial production are above those of past recessions (Figure 1). Even if we assume that economic activity peaked in March, industrial production is running more than 1% higher than March levels.

The report provided more good news. Rising industrial production was mostly driven by the auto manufacturing sector, which has struggled to increase production over the last two years amid a semiconductor shortage. But production rose almost 7% in July and output is now higher than pre-pandemic levels. The rising supply of new vehicles should also help ease inflation in the auto sector. Oil and gas drilling activity was another positive from the report. Output in this industry rose more than 3% in July and is up a whopping 55% over the past year. Rising oil and gas drilling output is welcome news on the inflation front, as energy prices have accounted for almost 30% of inflation over the past year (using the CPI index).

The other data point was U.S. retail sales. Overall sales were flat in July, but that was partly impacted by lower gas prices. Core retail sales (excluding autos, gasoline purchases, and restaurant sales) surged by 0.7%. Combine that with upward revisions to May and June retail sales, and we’re looking at relatively strong consumer spending on goods. Even if we adjust for inflation, i.e., by looking at “real” retail sales, spending was still up 0.1% in July, the first increase in three months. What is striking is how strong real retail sales are more than two years into the pandemic, which is when we got the big shift from services to goods consumption. It was widely anticipated that sales would fall back to trend by now as consumers switch back to services. But real sales are running 10% above the pre-crisis trend as of July.

The housing sector countered these positive reports. Existing home sales fell 5.9% in July and are now 20% lower than a year ago. The drop in demand is impacting builders as well, with housing starts shrinking 9.6% in July. No surprise that the decline was led by single-family starts, which fell 10.1% and are well below where they were before the pandemic in February 2020.

Housing has historically led recessions, and a significant reason is housing activity falls as the Federal Reserve increases rates, which pushes up mortgage rates. Yet, there are a couple of important differences between now and what we’ve seen in the past. For one thing the quality of borrowers has been much higher in this cycle, as lenders maintained tight standards following the last housing crash. Most recent mortgage originations have been going to borrowers with credit scores over 760. Also, prior to the recent rate hikes by the Federal Reserve, a lot of refinancing activity into fixed-rate mortgages took place as homeowners took advantage of historically low rates. As a result, mortgage debt service payments as a percentage of disposable income are close to record lows. So, the impact of higher rates on homeowners may be lessened this time around.

Policymakers continue to work on solutions. The meeting in Jackson Hole will provide additional clarity regarding interest rate policy. Meanwhile, lawmakers sprung into action and passed the Inflation Reduction Act, which was signed into law by President Biden last week. The bill spends just under $400 billion on clean energy and climate resilience, in addition to reducing some drug prices, temporarily subsidizing costs of health insurance on exchanges, and raising some taxes to offset the spending. All in all, over the next decade this law increases spending by $490 billion while raising $760 billion in revenue, thereby reducing the federal deficit by about $270 billion, making it the largest deficit reduction bill since 2011. However, despite the name, the bill will not have a significant impact on inflation in the near term. The most direct impact on inflation is via provisions to lower prescription drug costs for Medicare beneficiaries, thereby decreasing federal government spending.

Nevertheless, the bill is still significant with respect to climate and the energy transition. For one thing, it is an “all-of-the-above approach” that includes tax credits and subsidies for both alternative sources as well as oil, gas, and nuclear. The credits and subsidies are meant to incentivize adoption of clean energy, instead of using punitive measures to reduce demand for traditional fossil fuels. The law also seeks to revive industrial activity in the U.S., with incentives such as tax credits for in-shoring. For example: Electric vehicle tax credits apply only to cars made by companies that relocate supply chains out of China and other countries with which the U.S. does not have a free-trade agreement. The credits include requirements for cars to be assembled in North America while using critical minerals and components sourced domestically. This is a major shift with respect to the U.S. government’s role in industrial development and a counter to similar roles played by countries such as China, which seek to promote their own high-tech sectors.

Our assessment of the U.S. economy acknowledges some risks are worth watching. Housing and interest rates are concerns but are likely not as impactful as in previous market declines. Policy changes, whether rates or bills, which are designed to fight inflation, seem likely to have the biggest effect. The Inflation Reduction Act has received a lot of press, but the biggest inflation and market impact this week is likely to come out of the monetary policy conference in Jackson Hole, Wyoming, not Washington, D.C.