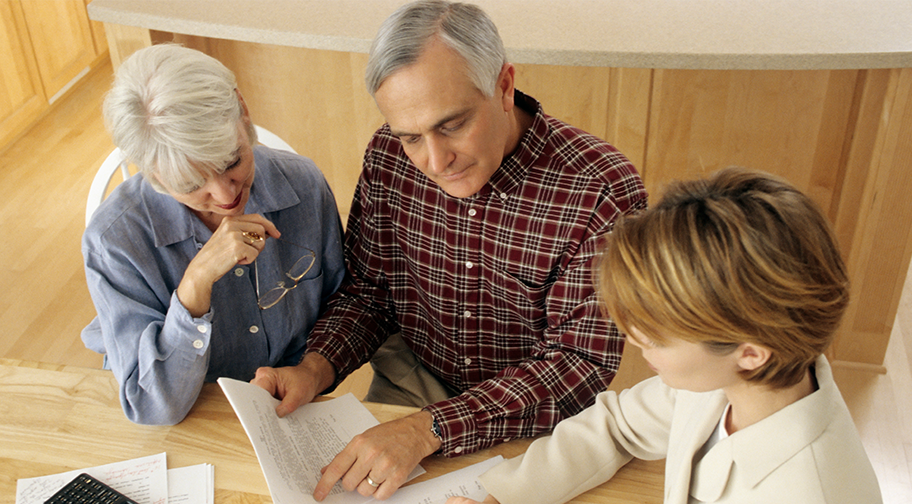 Markets reflected the jittery disposition of investors. The rapid move in interest rates and persistent inflation have unnerved some investors and contributed to higher volatility. Volatility has risen in most asset classes, but bond investors have experienced the biggest swings. 2022 is tied with 1994 for the second-most large declines in the last 29 years. And 2022 has more than seven months to go! (See Figure 1.)

The latest volatility seemed to stem from a realization that the Fed is serious about raising rates by 0.5% rather than the normal 0.25%. Fed speakers have been telegraphing a 0.5% rate hike for several weeks. It appears the market reaction is reflecting concern future rate hikes may be even more rapid.

Inflation continues to be a problem outside the U.S. European inflation rose 2.4% last month. Russia’s invasion of Ukraine pushed energy prices higher and caused headline inflation to spike. Core inflation was still very high but rose 1.2% last month. Canada experienced similar trends, as energy prices contributed to a monthly increase of 1.4%. Canada’s central bank increased interest rates 0.5% to help combat elevated inflation. In Japan and Germany, producer prices are the biggest challenge, and they are likely to be partially passed on to consumers. The reelection of French President Emmanuel Macron should be a positive for markets as his opponent’s economic positions carried increased risk. 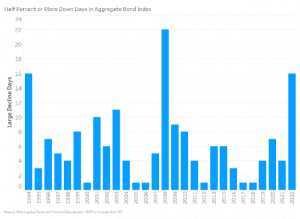 2022 may end up being the most volatile year for bonds in many decades. The Bloomberg U.S. Aggregate Bond Index has fallen more than 0.5% a total of 16 times this year. The index of investment-grade U.S. bonds is down 9.5% so far this year. The more frequent declines in the bond market have made it most difficult for conservative investors. The S&P 500 has fallen 10% this year. Equity corrections aren’t so surprising, but a near correction in less volatile bonds is more surprising.

1994 and 2008 are the only competition for 2022 when analyzing bond volatility. The chart above was stretched back to 1994 because the Fed increased rates six times that year by a total of 2.5%. A final 0.5% increase in early 1995 was the last time the Fed raised rates by more than 0.25% in a single meeting. 2008 was volatile for different reasons as rates were cut rapidly. Investors were very concerned about corporate and mortgage defaults and bond prices frequently fell in response.

Inflation and interest rates are the source of the volatility in 2022. As nearly everyone is aware, prices for many goods have spiked in recent months. The Consumer Price Index (CPI) rose 8.5% in the last 12 months and is magnitudes above the Fed’s 2% target. Even core inflation, which excludes the effects of rapidly rising energy prices, has increased 6.5% in the last year.

In response to rapid inflation the Fed has indicated it will accelerate the rate of interest rate hikes. When rates move higher, borrowing becomes more expensive and some debt-financed projects are reduced or cancelled because of the higher costs. Those cancelled projects help to slow economic growth to levels the economy can sustain, reducing inflation.

The Fed is unwinding its rapid reduction of rates in 2020 in response to COVID-19. Rates were reduced by 0.5% on March 3 and by a full 1% on March 16 of that year. When faced with economic shocks the Fed often acts quickly to make borrowing less expensive and allow companies to stay in business. The Fed’s rapid response was generally viewed as successful in helping to reduce the economic damage from the pandemic.

While the Fed will take drastic action to cut rates, it generally unwinds those steps much more slowly by raising rates 0.25% at a time and typically every three months. In retrospect, the Fed should have started inching rates earlier than the 0.25% rate hike on March 17, 2022. Low rates and prolonged fiscal support contributed to a strong recovery while supply chain snags and people leaving the workforce reduced capacity. Higher inflation was the result.

This week’s selloff in bonds is a little perplexing because Powell’s indication that a 0.5% hike is likely was already reflected in expectations and had been widely signaled by Powell and other Fed officials. Jittery markets are prone to react, and the initial market reaction to Powell’s comments was to expect an even larger rate hike than he had suggested.

What happens next will largely depend on how sensitive the economy is to rate hikes. It will also be influenced by the pandemic and how countries trade off spikes in coronavirus cases with the loss of economic production. Some forecasters are expecting the Fed to raise rates extremely quickly and push the economy into recession. Our view is the Fed will take a more measured pace but raise rates by 0.5% the next two meetings to accelerate the move toward a more neutral posture.

For investors, this is a tough environment, and there is a tendency to treat bond declines like stocks, where the slides reflect potential risk of a major business failure. With bonds, that can be part of the risk, but the bigger risk in today’s environment is high inflation and competition against new bonds with similar maturities and higher yields. If new bonds maturing in seven years pay 3%, existing bonds maturing around the same time need to provide a similar return. If an existing bond pays less interest than newly issued bonds, then the price of the existing bonds must drop to provide a similar yield to the new bonds.

Because bonds mature, unlike stocks, there is also some good news in this move to higher rates. As bonds in your portfolio mature, whether held directly or in a fund, that money may be reinvested in new bonds that pay a higher yield. For some investors, the move toward higher rates may be good news as it signals the artificially low rates associated with the pandemic are over and bond portfolios may provide more yield compared to recent years. While painful in the short term, the move way from ultra-low rates may help investors with longer time horizons.