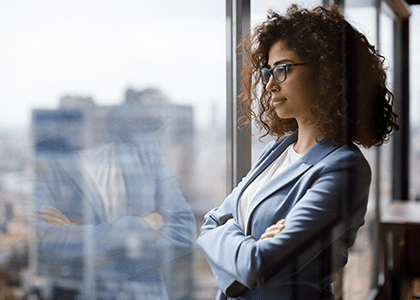 Inflation is starting to feel like a winter that just won’t give way to spring. The Consumer Price Index (CPI) climbed 1.2% last month and has now risen 8.5% in the last year (Figure 1). Energy and food prices were the main culprits, contributing 80% of the overall increase. Food prices jumped 1.0% and have now risen 8.8% in the last year. Used car prices declined last month, otherwise the data would have been worse. The decline in used car prices helped contain core CPI, which excludes food and energy and only increased 0.3%. Housing, airfares, and lodging were all contributors to higher prices.

U.S. retail sales rose only 0.5% last month. Because inflation increased 1.2%, real sales dropped 0.7%. Inflation is acting as a headwind to retail sales growth. As the economy opens up, internet retail sales have fallen 6.4% while general merchandise stores have experienced a 5.4% increase in sales.

Stocks reacted negatively to the various releases last week. The S&P 500 shed 2.1%. The MSCI ACWI slid 1.7%. The Bloomberg U.S. Aggregate Bond Index declined 0.7%, as high inflation pressured bond prices. U.S. economic releases will be relatively quiet this week. We’ll be watching international inflation trends for any differences between the U.S. and other markets. 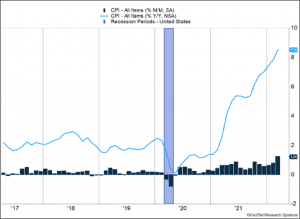 When is the Recession Going to Start?

“When is the recession going to start?” has quickly vaulted to No. 1 on the list of market-related questions we are receiving. The short answer is: Inflation risks are climbing, but we don’t expect a recession soon and maybe not for a while.

Economic strength is the biggest reason not to expect a recession in the near-term. Using a three-month rolling average, the U.S. economy has produced more than 500,000 jobs per month for nine consecutive months. A recession would have to include slowing employment growth, and so far the economy has remained strong. Somebody is going to have to start taking down “Help Wanted: All Positions” signs before the risk of inflation becomes material.

Concern for a near-term recession also ignores the fact that current interest rates are still stimulative. Assuming the Federal Reserve hikes rates by 0.5% at each of the next two meetings, short-term rates would still be between 1.25% and 1.50%. Rates that low are likely still stimulative to the economy. Policy isn’t close to being too tight. The most plausible scenario for a near-term recession is a decline in the European economy because of economic sanctions. Because of Europe’s size, that could provoke a further jump in energy prices and lower global economic activity. Recent downgrades for expected GDP growth suggest a slowing in Europe is already having an impact.

People are worried about a recession because inflation is strong, and the last time inflation was this high the Fed raised rates and caused a rare double-dip recession during which the economy fell back into recession shortly after recovering from the initial recession. Recent yield-curve inversions have fed into this concern. Inversions occur when a bond with a longer maturity has a lower rate than a bond with a shorter maturity. Many people believe yield curves signal a recession is likely because the Fed will raise rates higher than the economy can sustain.

This is the real issue and the real risk. Economists agree recession risks are increasing. In a recent survey by the Wall Street Journal, economists raised the risk of recession in the next 12 months from 18%, which is where it was in January, to 28%. The primary concern is inflation becomes too embedded in the economy, so the Fed has to raise rates above its long-term targets to wring inflationary pressures out of the economy. The high rates limit capital activity and send the economy lower.

It would be a fair question to ask: “If the Fed sees it is raising rates too much, why doesn’t it just quickly reverse course and keep the economy out of a recession?” That is what Fed members hope to do, but predicting how rate increases will affect the economy is challenging because rate increases slow some activity immediately while other activities gradually adjust. For example, when the Fed raises rates, credit card rates move up almost immediately, slowing spending and reducing inflationary pressures. But building projects that have already started are likely already funded, so they will keep going because the higher rates don’t affect them. While fewer new projects are started, it takes a while before existing projects are finished, and some of the inflationary pressure abates.

That’s why we generally agree with the Fed’s decision to raise rates more quickly and get them closer to neutral sooner. Once there, the Fed should consider slowing down the pace of rate hikes to see how the economy is tolerating higher rates. In 2019, the Fed reversed nearly all of its hikes from 2018, and the economy would have likely avoided a recession if it hadn’t been for COVID-19. While difficult, we believe the Fed is well situated to meet the challenge. Getting rates to the lower end of neutral and then slowing rate increases seems the best way for the Fed to pull off a “soft landing” for the economy.