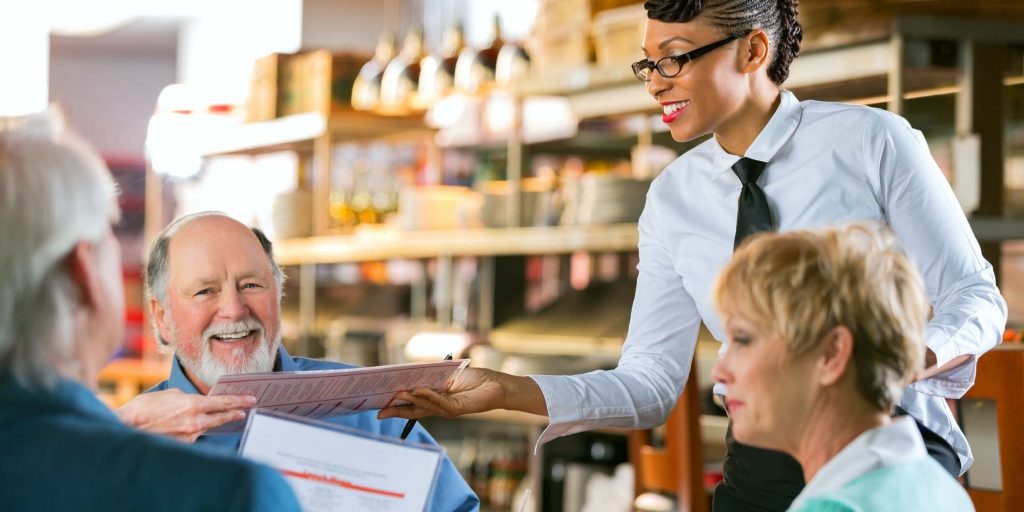 A strong U.S. employment report was the top market event last week. Payrolls surged 943,000, and the prior two months were revised higher by 119,000 (Figure 1). Restaurants and bars continue to rehire workers as activity expands. The leisure and hospitality segment, which includes eating establishments, added 380,000 jobs.

Unemployment dropped from 5.9% to 5.4%. Wages increased 0.4%, which is a modestly faster rate than prior to the pandemic. Wage gains at restaurants and bars are growing even faster as restaurants are anxious to rehire amid worker shortages.

Stocks benefited from the news. The S&P 500 gained 1.0% as did the MSCI ACWI. The Bloomberg BarCap Aggregate Bond Index dropped 0.4% as the strong jobs report caused some investors to expect the Federal Reserve to tighten policy sooner. Inflation data in the U.S. and China will headline key economic releases this week. 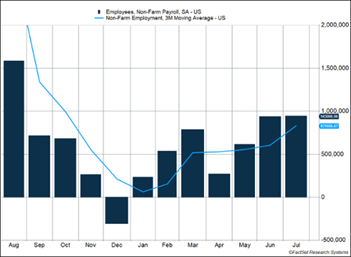 The U.S. women’s indoor volleyball team and the U.S. jobs markets seem to be on similar paths. The volleyball team captured its first Olympic gold medal last week. In pool play, the results were very good, but the team looked vulnerable. They were swept by Russia and had two five-set wins. But when the tournament transitioned to the medal round, their performance reached a new level and the team didn’t drop a set in its final three matches.

The U.S. jobs market is making its own case for reaching the high level of performance many had anticipated. After some bumpy performance early in the year, the last two jobs reports have shown the economy is surpassing expectations.

July nonfarm payrolls expanded 943,000, easily beating an average prediction of 875,000. The prior two months were revised a combined 119,000 higher. Adding the revisions to the preliminary July estimate means more than 1 million people were employed at the end of July than was estimated one month earlier.

The biggest gains were in restaurants and bars, which added 380,000 new jobs and accounted for 40% of the net gains in July. Even with the gains, demand is robust. Fast food restaurants used to advertise their chicken sandwiches or sales to lure customers in. But now restaurants are using billboards to advertise job openings. Supply, rather than demand, is the current problem.

Even with the gains, the economy has only recovered 75% of the jobs lost since February 2020. There are still 5.7 million fewer workers than the pre-pandemic peak. Education hiring has been weak throughout the pandemic. Like other sectors where labor supply is a key challenge, the back-to-school season may be more about getting teachers back to the classroom than purchasing new clothes.

Wages continue to creep higher as companies encourage the reluctant to return to work. Average hourly earnings rose 0.4%, which is just slightly faster than the pace prior to the pandemic. During the last year, wages have risen 4% even though many of the new jobs are being added in lower-wage sectors.

Stocks generally reacted favorably to the news. As noted above, the S&P 500 rose 1.0% last week and finished higher on Friday, after the employment data was released. Bonds took the other track and finished the week lower as interest rates increased in response to the positive economic news. Bond prices move in the opposite direction of interest rates. The concern isn’t so much that the Fed will raise rates significantly sooner. The probability of a rate hike by the end of next year moved up just 1% and remains slightly above 40%. Instead, investors are focused on whether the Fed will taper off its purchases of long-term government bonds and mortgages, potentially allowing long-term rates to rise.

One of the temptations facing investors is to reduce risk in the face of uncertainty as the desire to avoid downturns can be alluring. Suffering through a downturn is about as much fun as seeing your favorite volleyball team have three consecutive service errors. But bearing risk and downturns are part of investing. Investing and volleyball will have some bad moments, like service errors and downturns, but statistics show putting up with the temporary pain can allow us to reach our goals and win the match.